The Federal Government is injecting billions of dollars into healthcare to drive innovation and support an aging population, with a $12.4 billion increase in the Health Budget and a $414.5 billion investment in health, aged care and sport.

“We will invest in a National Health and Medical Industry Growth Plan of $1.3 billion, including a ground-breaking $500 million Australian Genomics Health Futures Mission,” Hunt said. “The Government is also delivering the More Choices for a Longer Life Package to help Australians maximise the opportunities that a longer life brings.”

For 2017-18, $34.4 billion has been credited to the Fund and a further credit of $35.3 billion will be made to meet the estimated Medicare Benefits Schedule (MBS) and Pharmaceutical Benefits Scheme (PBS) expenditure for 2018-19.

Meanwhile, Medicare spending is set to increase every year from $24 billion in 2017-18 to $28.8 billion in 2021-22. Indexation of the Medicare Benefits Schedule, which the Government reintroduced in last year’s Budget is set to deliver an additional $1.5 billion for Medicare services through to 2021-22.

Medicare support for renal dialysis will continue for remote communities, a decision implemented following recommendations from the expert MBS Review Taskforce and the independent Medical Services Advisory Committee. MRI scans for prostate cancer checks, a new cutting edge 3D mammography test for the early detection of breast cancer and new genetic testing for cystic fibrosis will also be part of this initiative.

Initiatives for an aging population

The 2018-19 Budget will deliver the “More Choices For a Longer Life package,” which will support the health of older Australians and be better prepared, more independent and connected to their communities.

This Package includes an additional 14,000 high-level home care packages so older Australians can stay in their homes longer if they want to and also allows pensioners to earn more without reducing their pension.

The establishment of a new “Aged Care Quality and Safety Commission” is also set to create a “tough cop on the beat” to ensure older Australians receive the best possible care, with an additional $50 million to assist providers implement the new standards.

MyAged Care will receive an extra $61.7 million in funding to make it easier to use, along with simplifying the forms required to apply for aged care services, and $7.4 million to trial navigators to assist people to choose the aged care services that suit their needs.

Palliative care is also on the agenda, with $32.8 million in funding to fill current gaps in support services, $5.3 million for innovations in managing dementia, and $102.5 million for mental health programs for older Australians.

The budget includes a $2.4 billion injection into new medicines, which includes a new $1 billion provision for listing all new medicines recommendation by the independent Pharmaceutical Benefits Advisory Committee.

“We list and will continue to list, every single drug recommended by the medical experts – the Pharmaceutical Benefits Advisory Committee – with approximately $9 billion of investment in new drug listings since coming into government,” Hunt said.

In particular, the Government will provide $703.6 million for the listing of Kisqali ® on the PBS to support women with breast cancer. Without subsidy, patients would pay $71,820 per year.

The medicines Spinraza ® will also be listed on the PBS, a life-changing medicine which treats the devastating illness Spinal Muscular Atrophy.

“Without subsidy, patients would pay more than $367,850 per year. These new listings mean patients will have access to these medicines paying a maximum of $39.50 per script. Concessional patients, including pensioners, will pay just $6.40,” Hunt added.

The Government has also signed a landmark agreement with Medicines Australia to improve access to life saving medicines for rare diseases through key reforms to the Life Saving Drugs Program.

The Government is set to deliver more than $30 billion in additional public hospital funding under a five-year National Health Agreement, with funding increasing for every state and territory, every year.

From 2020-21 to 2024-25, the new agreement will deliver a record $130.2 billion in public hospital funding, with six of Australia’s eight states and territories now covered by this new agreement, including three Labor governments and three Liberal governments.

Mental health funding will receive an additional $338.1 million, with a focus on suicide prevention, research and older Australians and advancing the Fifth National Mental Health and Suicide Prevention Plan.

“We will expand the beyondblue Way Back Support Service across Australia, which provides outreach, follow-up care and practical support to people discharged from hospital after a suicide attempt,” Hunt said. “This will see an investment of $37.6 million.”

The Government will also fund a new Million Minds Mission through the Medical Research Future Fund. Over the next 10 years, $125 million will be invested in new research to support an additional million people with mental illness, through new research, diagnosis and treatment.

Recognising that men over 85 years of age have the highest risk of suicide for all ages, the Federal Government will deliver $82.5 million for psychological services in residential aged care. Meanwhile mental health nurses will help develop and deliver a $20 million program to support older Australians in the community who are isolated and at risk.

Royal Flying Doctor Service will also now be funded for mental health outreach, which will receive $20.4 million to ensure regional and rural Australians get care wherever they are.

This year’s budget reveals $6 billion in funding for Australia’s health and medical research sector, including $3.5 billion for the National Health and Medical Research Council, $2 billion in disbursements from the Medical Research Future Fund and $500 million from the Biomedical Translation Fund.

“The foundation of the Government’s commitment to health and medical research is a new job boosting $1.3 billion National Health and Medical Industry Growth Plan, to improve health outcomes for hundreds of thousands of Australians, create tens of thousands of new jobs, and develop the next generation of Australia’s global leading industries,” Hunt said.

According to Hunt, the centrepiece of the Plan is a $500 million Australian Genomics Health Futures Mission which will help more than 200,000 Australians live longer and receive better treatment tailored to their medical needs.

The first genomics project will be Mackenzie’s Mission, with $20 million being provided for a pre-conception screening trial for rare and debilitating birth disorders including Spinal Muscular Atrophy, Fragile X and Cystic Fibrosis.

“We will also establish a new $125 million chronic disease fund, the Targeted Translation Research Accelerator, with a focus on diabetes and cardiac disease,” Hunt said.

A new rural healthcare strategy is set to improve access to doctors, nurses and other health care services for all Australians, especially those in remote and rural regions.

The “Stronger Rural Health Strategy” is set to improve the delivery of healthcare providing greater opportunities for Australian doctors through better teaching, training, recruitment and retention. Developed in close consultation with the AMA, RACGP, ACRRM and other rural medical leaders, the package will also see growth in multidisciplinary care and increased access to nursing and allied health services.

In order to support teaching in the regions, we will invest $95.4 million to create the new ‘Murray Darling Medical Schools Network’ comprising of over 6 universities around Australia. This will be done while retaining the existing number of Commonwealth Supported Places for medical students.

This year’s budget will see an extra $77.9 million in funding for infant and maternal health and for the first 2,000 days of a child’s life. This includes $17.5 million for maternal and infant health medical research.

Health professionals will give parents-to-be simple and effective guidance on staying healthy during pregnancy with a $3.0 million program. The Government will also extend the childhood immunisation education campaign, targeting areas with low vaccination rates.

Every mother will be given the opportunity to vaccinate against whooping cough, with $39.5 million to fund the pertussis vaccine to all pregnant women. Meanwhile $6.2 million is set to subsidise the cost of more insulin pumps for children with type 1 diabetes.

With injury the leading cause of death of children aged one to 16 years, the Government will fund $0.9 million for the development of a new National Injury Prevention Strategy aimed at reducing childhood injuries. In addition, funding of $1.0 million for the SeeMore Safety Program will support preschool and kindergarten children and their families to reduce the number of preventable childhood injuries.

A new $1 million program is also set to assist GPs to learn more about endometriosis, so they can better diagnose and treat the condition, which can affect around one in ten women and is a key contributor to infertility.

And to help parents keep track of their children’s health from birth, the Government will also introduce a national digital baby book with $5.0 million of funding, replacing state and territory hard copy baby books, and giving children their passport to a lifelong health record.

Promoting a healthy and active Australia 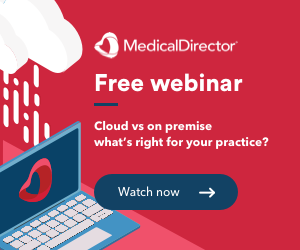 Work from anywhere, any time: the future of healthcare?

Can you run a medical practice without a physical server?